This past weekend was the season opener for the 2018 PMRA series. The original opening race in April was postponed due to rain, so everyone was anxious to get the series kicked off! It was a double header event with races on Saturday and Sunday, which made for a full weekend. Even though it’s just the beginning of the PMRA season, it was already hot.

The highlight of the weekend was that Elyse took first place in Ultra Street on Saturday after going up against Ben Gardner in the Finals. She also made it to the quarterfinals in Super Comp and Pro E/T.

On Sunday Elyse fell out of Super Comp and Pro E/T early. Competition was tight as Elyse ran a 8.900 in the 8.90 index and still lost the race by 0.0016! The radiator drain plug vibrated loose between the Pro E/T and Super Comp rounds, and as Elyse pulled back into the pit coolant started leaking all over. Chris pulled the bodywork off, found the problem, looked the bike over, added some fluid, and put it all back together as the first bikes in the Super Comp class were pulling up to the starting line. A few fellow racers came over to help out while all this was going on; this is the awesome part about racing! Competitors are constantly helping each other out doing everything they can to get the other person to the line but make no mistake, they still want to win once the lights drop!

Overall it was a fun weekend and great to be back with the PMRA family. The McKinnon Motorsports team was excited for Elyse’s Ultra Street win and good performance in the other classes as well. 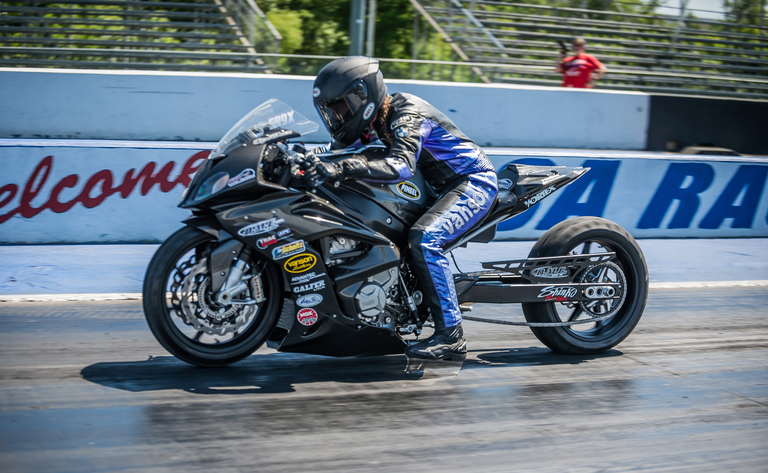